Is Greenwood Formula an amazing opportunity to make money or is it another scam? In this post I will explain what this is all about. The Greenwood formula has an interesting sales page promising to make you rich pretty much overnight and with only a few clicks.

I am sure that you worked hard to earn your money and you must agree with me that you wouldn’t want to lose that money to a scam. Am I right?

What Is Greenwood Formula?

If you have landed on a Greenwood Formula (GWF) page you have probably watched the whole video presentation that promises you riches. They go as far as guaranteeing to pay you $10,000 if you fail to make money with them. They also say it’s totally free. Later you see a bunch of testimonials from people who allegedly made amazing money with the GWF system. However, the video never explains what exactly it is and how it makes money.

The program is being actively advertised in New Zealand at the moment although they have been also pushing in Singapore, Australia, United Kingdom, Canada and a few others.

So what is exactly a Greenwood Formula system?

In short, GWF deals with binary options. I won’t go into all of the details about binary options but a quick search online will explain to you that it’s pretty much gambling. You bet on a stock to either go up or down by certain time. If the stock behaves how you predicted – you earn money. If a stock does not behave how you anticipated you lose the whole investment. Now your money could be gambled not only on stock but also on forex (foreign exchange) and many other things that are being traded.

Sounds fair, so where is the problem?

Well the very first issue with programs like the Greenwood Formula is what I just mentioned: it’s gambling. When you invest in stocks, your investment will go up and down depending on the market. In binary options your investment doesn’t go down a few point or a few dollars, you lose the whole thing, without a chance of getting it back.

The second issue is that most binary options platforms exist on the internet ONLY. They are not regulated by SEC or any other exchange authority meaning that people who run these systems could do whatever they want. They could play with “numbers” within the software to not reflect the real changes in the market but rather to make sure you lose your bet. The worst part, they could let you “win” a few time to lure you in for a bigger investment and then you’ll lose it all.

Binary Options are highly discouraged in most countries and are completely banned in some others. This is not an investment opportunity but rather a fast way to lose all of your money.

The Greenwood Formula video never actually tells you it’s about binary options. In fact, the website and the video never give out any details of what exactly you’ll be doing. You should always be very doubtful when a company doesn’t make their offer clear. They don’t spend a single second explaining what their business is about. All they do is promise riches in a poorly produced video that looks like it came out from a 1995 infomercial.

Going back to that presentation video, you’re told the Greenwood Formula doesn’t cost a single dollar. This is true. You will not pay any money to get access to the trader HOWEVER if you want to make money you’d have to deposit a minimum of $250 of your money into the account and start “placing your bets”. So indirectly it does cost you money and it is not free as they promise.

There are and have been many many many similar “programs” that use the same shady marketing techniques on their homepages, however most of them use the same software and they all make money by tricking you into putting your real money into that account.

At this point I’ve been in the internet business space for almost 9 years. At the beginning I have unfortunately wasted quite a bit of money on scams that promised to make me rich. However with time I was able to spot the red flags rather quickly and often just a few minutes of my time is enough to see that the “opportunity” presented is actually a scam.

The same goes for the Greenwood Formula: the red flags are everywhere. Should we go through them?

Invitation Only – A Lie

At the very beginning of the video you are greeted by “Jake” who is welcoming you to an “invitation only” website. This alone is bunch of bull. This is not an invitation only page. This website was either sent to you through email (and probably ended up in your spam box). Maybe you saw their page as a pop-up (because you aren’t using an Ad Blocker and you still live with pop-ups). The point is, this page is presented to hundreds if not thousands of people every single day. Calling it an “invitation only” is a lie.

The Greenwood Formula used to live on the domain called GreenwoodFormula.com. If you go to this domain name you will see it’s “FOR SALE”. I am quite certain that this domain name has been reported to Google and many other search engines several times and is not blacklisted from search engines and other places. So what did the creators do with that programs? They moved it to a new domain name. For example I was presented with a page called TheProfitsMaker.net. I am sure there are many other domains used for this program in order to create more confusion and make the scam harder to report.

Update: It seems like TheProfitMaker is also gone now. The scam has moved on yet to another website.

The Greenwood Formula targets beginners. It also targets people who are desperate for money. This is exactly how most scams function. They offer incredible riches, very quickly and without you having to do anything. Think about it: if it was that easy, don’t you think we’d all be rich by now? If it sounds too good to be true it actually is.

If you have spent any time trying to earn money online (regardless if it’s Forex, trading, niche websites, selling on amazon, etc) you know that it’s not easy. Making money online is very possible and thousands of people started from zero. Lots of people are making millions of dollars online but it didn’t happen overnight. It certainly didn’t happen without investing the proper amount of effort. You want to make money online? I’d love to help you. Go to my START page and get your free course. Over 8,000 people took that course by now and do you know what they’ll tell you about it? There isn’t a magic shortcut to riches. You can earn a very impressive income online but get ready to work for it… and make sure you’re patient because success takes time.

Jake shows how his new account was at $250 the first day than $19,000 the next. I hope you don’t believe this for a second. This is probably one of the biggest red fags out there. It gets you excited, it makes you think how that would help you pay off your debts. It makes you think how you’ll be driving that new Porsche. It makes you dream of beautiful sunsets on your private yacht. But in reality it’s all a lie.

Don’t fall for it. There is no real guarantee. Do you really think this guy would be happily giving out $10,000 checks to everyone? This kind of promise might seem very generous but you know what they say, if it sounds to good to be true…

To make it more “legitimate” they’ll simply get you on a technicality. They’ll tell you you didn’t invest enough money to qualify for a refund or you didn’t do all the required “trades”. They could also offer you the $10k in “credit” that you could use for your future trades with them. However, by the time you realize you have been fooled out of your money you probably wouldn’t even be able to login to their website to ask for a refund. At the moment of writing this they have burned yet through another domain name and moved on. People report on their practices all over the internet so they need to keep on moving in order to keep fooling people.

Their disclaimers makes it rather obvious that all of the people you see in the promotional video are paid actors. Often times you can find such “clients” on Fiverr.com – a place where you could buy a video testimonial for only $5. And hired actors don’t really care what they’re “endorsing”. Especially if they’re paid just $5 to do it.

A quick reverse lookup for the images of their customers reveals that the photos come from a stock catalogue websites. Once again, a place where you can, for only a couple of dollars, purchase any photo and use it on your website. By the way, Jake is fake as well. 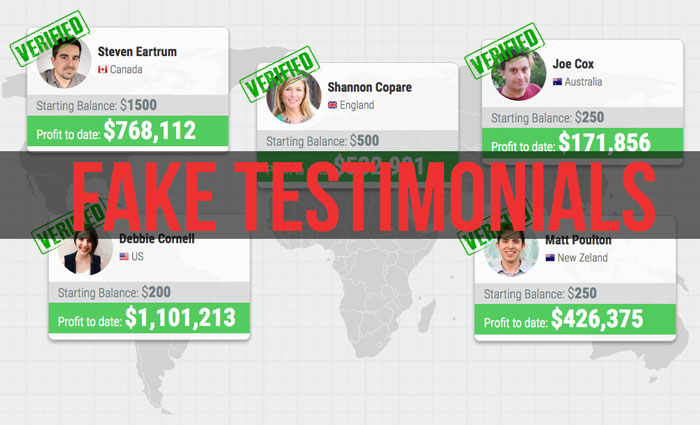 The Verdict: Greenwood Formula is a Scam

Hopefully you have found this review before you spent your money on Greenwood Formula scam. I have mentioned several things that you should pay attention to in the future:

Please stay safe and keep your money in your wallet.

Have you checked out my  #1 Recommendation in online business? Put you wallet away, the starter membership is totally free.

Start Your Own Online Business In Just 5 Days!

Step by step course. No experience or money required.

Please check your inbox to confirm.

I hate spam as much as you do. Your email will never be shared.

2 thoughts on “Greenwood Formula – A Scam or an Opportunity”

Put Your Wallet Away...

Stop wasting your time and money. Take this 5 days course that will teach you how to start your own successful online business today, without getting involved in some scam or scheme. This no strings attached training is 100% free.

You have successfully signed up for the course. Please check your inbox to confirm.

We hate spam. Your email will never be shared or distributed.